Český Krumlov is one of the most beautiful, and naturally most visited, towns in the Czech Republic. It was founded in the middle 13th century by the Vítkovec family and later became the property of their successors, the Rožmberks. The most important European-level monument in Český Krumlov is the castle, which is the second largest castle in the country after Prague. The castle consists of an Upper and Lower Castle, the lower part dominated by the circular Renaissance tower. The fifth castle courtyard holds one of the world’s most unique monuments – the Baroque castle theatre from the early 17th century with its exceptionally well-preserved furnishings, stage sets, and costumes. The castle also includes the Baroque-Rococo castle garden, spread over 10 hectares. The heart of the garden boasts the beautiful Baroque Cascading Fountain as well as the Bellarie Summer Palace just nearby. Today, the palace is used as a backdrop for performances held at the revolving auditorium, a popular open-air theatre. The castle garden is connected to the castle itself by a monumental stone bridge known as the “Clad Bridge”, or Na plášti. Just below the castle is the area known as Latrán with its many valuable Gothic buildings. Latrán is connected with the Old Town with a wooden bridge spanning the Vltava River. The Old Town of Český Krumlov consists of mostly original Gothic and Baroque buildings and narrow winding streets. This part of Český Krumlov has remained practically unchanged since its foundation. The town’s silhouette is shaped by the tall slender tower of the Gothic Church of St. Vitus from the early 14th century and the tower of the former Church of St. Jošt. The Svornosti town square in the centre of the Old Town is dominated by the massive façade of the Renaissance town hall from the late 16th century and a Marian Column from the beginning of the 17th century.
There is only one town gate remaining from the town’s original fortification system, called Budějovická. There is a permanent theatre company in the town in addition to the renowned seasonal activities of the revolving auditorium, and fine arts connoisseurs can enjoy a number of galleries and museums such as the Seidel Photographic Studio Museum, Egon Schiele Art Centrum, the Wax Museum, and more.
www.ceskykrumlov.cz

Roughly four kilometers west of Vyšší Brod, a vast sea of boulders named “Devil’s Wall” covers the slope over a deep river valley. This rare geological formation covering 10 hectares formed through the gradual process of frost and wind erosion on a mass of granite rock. Čertova stěna has been a natural reservation since 1956.
There are a number of legends associated with the formation of this curious natural site, one of which even inspired Bedřich Smetana to write an opera of the same name. This romantic comedy in three acts was first performed in Prague in 1882.

This is a romantic ruin of a massive castle founded by the Rožmberks in the middle 14th century on a formidable and well protected site high above the confluence of the Vltava and Křemžský Creek. Today, the remains of this castle are one of the most extensive and best preserved monuments of this type in the Czech Republic. The castle ruin is now in the care of a civic association, is open to the public, and is a favourite destination for hikers. The castle ruins are now regularly used to host concerts, swordfighting displays, theatre performances, medieval markets, presentations, and exhibitions.
Next to the nearby village of Třísov are the remains of a Celtic oppidum from the middle 2nd century B.C.
www.divcikamen.cz

This is the largest of the towns bordering Lake Lipno. As a recreation center on the left bank of the lake, it's also known as the birthplace of the writer Adalbert Stifter (1805–1868). His memorial is located directly in his family home.
www.horniplana.cz

Birthplace of the Schwarzenberg Navigational Canal architect Josef Rosenauer (1735–1804). This little town set at the edge of Blanský Forest was probably founded in the middle 13th century. There is) a late Gothic church with unique ribbed vaulting and mostly Baroque decorations from the end of the 15th century located on the town square.
Josef Rosenauer and his works are commemorated in the local Schwarzenberg Navigational Canal Museum (Chvalšiny  No. 124).
www.chvalsiny.cz

This is the tallest mountain (1083 m ASL) of Blanský Forest. The peak of the mountain holds the oldest stone lookout tower in the country, built in 1825. Hikers can enjoy the chalet with restaurant and accommodations. Not far below the peak, a 173 meter tall television tower was erected in 1975. The astronomic observatory on Kleť is the highest observatory in the country and is open to the public for regular excursions.
When the weather is clear, the tower offers a beautiful view onto the Alps including the massive Dachstein.
The mountaintop can be reached by foot or by a chairlift from the village of Krásetín (a train station on the railway between České Budějovice and Český Krumlov).
www.klet.com

This is the first level of the “Vltava Cascade”. The Lake Lipno dam, built from earth and 1/3 concrete, was built in 1952–1959. It holds over 300 cubic meters of water and creates a water reservoir with an area of 48.7 km2, making it the largest lake in the Czech Republic. The lake’s name comes from the small town of Lipno that the lake flooded and was rebuilt higher up on the left side of the lake, above the dam.
Deep below and inside the dam, a hydroelectric power plant holds 2 Francis turbines with a fall of 170 meters. From here, the water flows 3.6 km through an underground tunnel into the “Lipno II” equalizing reservoir before Vyšší Brod.
www.lipno.info

Malšín is a small village about 15 km south of Český Krumlov, first mentioned in writing in 1339. The local church of St. Margaret, first mentioned in 1384, is one of the the highest located church es in the Czech Republic at 794 meters ASL. In the past, Malšín was a strategic location for protecting the land routes, since it provided (and still provides) one of the best panoramic views towards the Austrian border. A short walk from the village, on a headland above the valley on a site called Tumberg, there used to stand a guard tower. The tower is now gone; it’s been replaced by the pilgrimage church of the Virgin Mary.
www.malsin.cz

The altitude of this pond (731 m) makes it one of the highest ponds in Bohemia. The pond covers 138 hectares and was founded at the beginning of the 15th century.
You can get there from the village of Hodňov on the left shore of Lipno, about 5 km from Černá v Pošumaví.

Nowadays this town is a popular stop for canoers and rafters along the Vltava River. The river here flows around a rock promontory which bears a massive castle, founded in the middle 13th century by the Vítkovec family.  The castle interiors are richly decorated, but the biggest attraction here is the newly-opened 50 meter high English Tower. Rožmberk is one of the castles where the ghost of Perchta of Rožmberk appears, mainly known as the White Lady.
www.hrad-rozmberk.eu

This little town is mostly known as an important pilgrimage site in South Bohemia. In the 17th century, 25 chapels with murals were built near the town to form a Calvary path. The town square holds the Church of the Holy Spirit, built in 1627–1697. The Roubenka Railway Museum in town is quite renowned. Římov is also the location of the water reservoir, built on the Malše River in 1971–1978 to provide drinking water to České Budějovice.
www.obecrimov.cz

This is the highest located castle ruin in Bohemia (1053 m ASL). It was founded by the Vítkovec family in the middle 13th century. The castle was later abandoned and gradually dilapidated into a ruin. After WWII, it served as a border tower. Today, the castle ruin has been reconstructed and is open to the public. The castle’s former lookout tower has recently been equipped with a wooden platform, offering one of the most beautiful views onto Lake Lipno.
www.vitkuv–hradek.mysteria.cz

Everyone will have an unforgettable experience in Vyšší Brod, whether they decide to visit the quiet natural sites, participate in sports challenges or visit historic monuments.

Vyšší Brod is located in the Šumava foothills, from where it is only a short distance to Upper Austria. In the past trade caravans crossed the Vltava River here; today Vyšší Brod is the destination of everyone looking for an unforgettable experience and pleasant relaxation. The local Cistercian Abbey was established by the Rožemberk Family in 1259 as their last resting place. The Abbey conceals valuable historic treasures: a library containing 70,000 volumes, the Vyšší Brod Madonna and the legendary Záviš’s Cross. The Postal Museum presents the history of the postal service and don’t forget to visit Saint Wolfgang’s Waterfalls and the Devil’s Wall. Vyšší Brod is the starting point of many canoe trips along the Vltava River, with a number of boating equipment hire facilities for people wishing to travel down river by boat. Unusual vessels traditionally set out on the Vltava in September. The local hotels and guesthouses offer comfortable accommodation and the restaurants offer regional specialities. The local micro-brewery, the cake shops and bakeries are renowned for their products. Of course everyone works up an appetite in the fresh air…
www.mestovyssibrod.cz

Today the name means “Golden Crown”, but originally, this settlement in a deep valley of the Vltava was named “Holy Thorny Crown” and was founded together with the monastery in 1263 by King Přemysl Otakar II. The Cistercian monastery was supposed to hinder the expansive tendencies of the Krumlov Vítkovec family. The monastery’s most prosperous period was during the 14th century, but it was abandoned for 17 years during the Hussite Wars. The monastery was dissolved in 1785 by Emperor Josef II, and today the entire complex is one of the most beautiful and valuable examples of South Bohemian Gothic architecture. Its most valuable building is the three–nave Basilica of the Assumption of the Virgin Mary.
www.zlatakoruna.cz 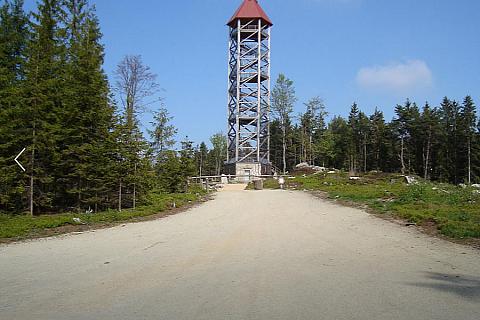 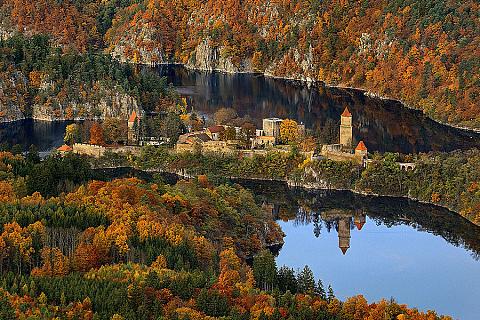 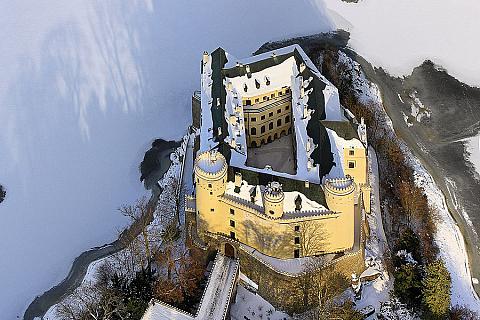 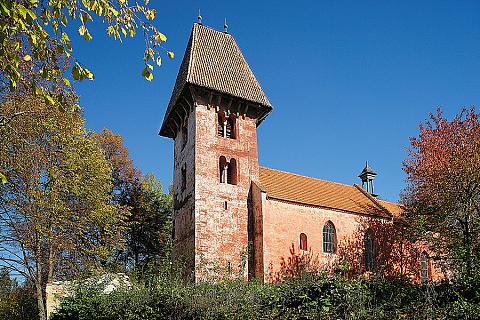 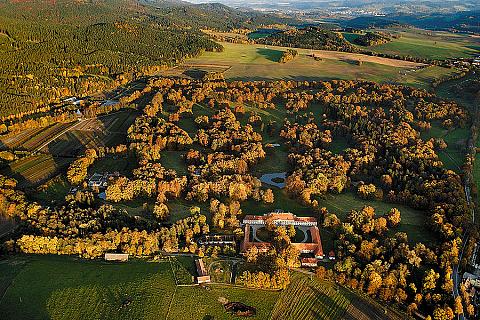 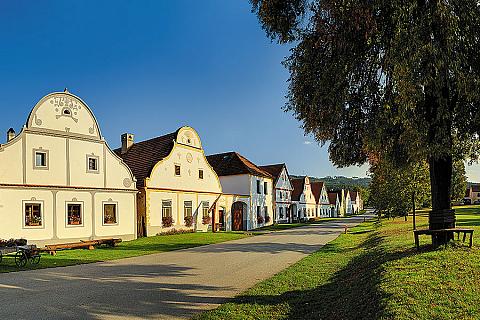